It's not because this post is titled "Fishin Golfin B.C Cottage Trip 2018 and memories of past Cccottage ..."


It's because our story goes deep into the lives of the participants. The beginning was only 60 odd years ago in a separate grade school and a public grade school in the Leslieville area of south-eastern Toronto.
There's plenty of detail that could be authored about pre-teen adventures which could reveal individual personality characteristics; however, I believe that the beginning should start around the time when one or more of us suggested a rental cottage for the summer would provide a great place to drink and have some harmless fun. It wasn't me, I came along a little later, because I was busy playing tennis at Kew Gardens and quaffing beers after a hot day on the courts with Kathy, Gilda, Dennis, Ken and many others who enjoyed the game.

And so it began at Thurstonia Park on Sturgeon Lake in a corner lot's small wooden cottage with paper slim walls for room dividers and a larger common area for the invited guests to get to know us. 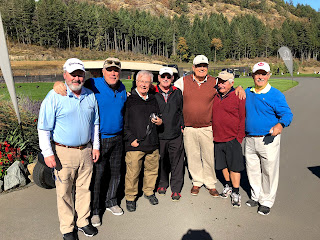 This is Rick, Rod, Bill, Larry, Ted, Tom and Dan; but I digress: let's get back to our story. Guests, there were plenty and the fact that some of these went on to marry some of those pictured and some not so fortunate to have been available for the photograph at Bear Mountain Golf Club in Victoria B.C. [At the time of this writing one couple who met at the cottage are still married.] John Delisle (who is not pictured here), and one of the originators in the middle 1960's has been approached to participate in this narrative. His memory is incredible and will dictate much of this story that has fascinated many who know us.

In Thurstonia one of the cottage owners had built a dirt filled tennis court in his back yard. We had a few games between beers that induced the sweat which always makes the booze go down even faster. I must tell you a little about the volume of consumption to give you a sense of this all consuming activity. On Labour Day in September the empties were returned to the LCBO. 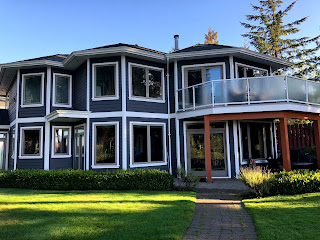 Picture if you will a wall of fifteen beer cases wide and eight beer cases high. That's a lot of brew and incredibly so, nobody got hurt in any way except one perhaps. And that was reported to be an elder citizen who owned the cottage. We'll write a little later about her: it's a great story about youth and responsibility. This picture is of the cottage rented by Sooke Bay in B.C.. I'm told it rented for $4500.00 the week. (Three times the value of a new car in 1965!) 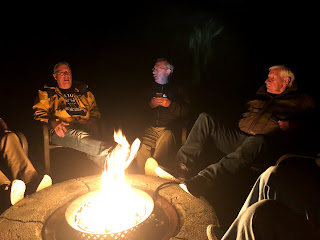 Sitting around the camp fire in Sooke was ideal to continue the reminiscing that takes place every year. We talk about the guys who made the owners list as well as the ones who were invited to chillax at the cottage; we talk about the girls that came and went as well as the ones who made the preferred list. Not surprisingly so from time to time we grope for a name of so and so who did something of significance. Some time the name pops up, and some time it doesn't. The memory is vivid, some times blurry, we always move on. 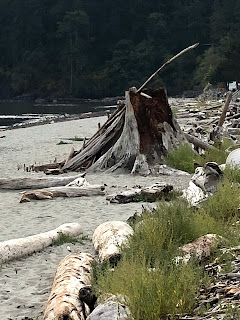 Even though this and the next picture are not of one of us I particularly like the drift wood on the beach combined with the large stones beyond the water's edge. All of this is at Sooke Bay 2018.
Thurstonia Park has never been as visually attractive as the mountain and ocean views of Canada's magnificent Vancouver Island, but it was the weekend activity that we looked forward to every week. Phil, who incidentally never became one of the alumnae of the Cccottage Reunion, would bring a Disney movie, projector and screen to set up in the park almost every weekend. This was for the kids, a kind of mini-baby sitting service. The kids loved it along with the Goofy Grape and popcorn that put the early evenings over the top. The parents in the park loved it; they loved Phil and the rest of us too. We were not the beer drinking hooligans that some may have thought. We could do no wrong. The elder lady owner of the Cccottage thought otherwise. She was proven wrong in a court of law in a magnificent mahogany-lined Toronto Court House complete with Security Guards, Lawyers for the Plaintiff and a Lawyer for the defendants. So here's the rest of the story. 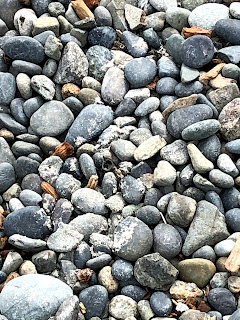 Ten or more of us, the defendants [John Delisle, Phil Phillips and Paul Deacon named in the legal document], were lined up wearing suits and ties and eagerly wondering what would become of her charge: "General and special damages in the amount of $4,040.32 for malicious damage plus $1,000.00 for punitive damages caused by the defendants alternately for breach of the oral lease between the plaintiff and the defendants alternatively for waste: by way of injury to the plaintiff's reversion interest in the said premises [...]" The document outlining the charges goes on for eight pages dear reader not to be repeated here.
Mrs. Julia Walton, the plaintiff was asked to take the stand and the questioning began. The variety of questions asked by both sides are quite blurry now that 48 years have passed save one:
The entire court heard her say when asked why she believed the cottage needed to be fumigated. She replied: "Because they brought girls into my cottage."
That having been said the Attorneys were summoned to the bar and then to the Judges chambers. Who can say what their conversation centred on. I'm guessing the lawyers were roasted for allowing this case to reach his courtroom. When they returned to the courtroom the Judge awarded Ms Walton $500.00 and slammed his gavel into the desk. All of the Defendants provided a small amount of money for the fine and attorney's fees and went back to work.

[The Cccottage Reunion story will be continued. I hope you have enjoyed this one and look forward to the next.]

On November 25, 2018 I received an email from John Delisle entitled "Stuff" and it goes on to tell a story about he and cousin Bill [Rabbit] driving back to Toronto after consuming a few beers at the cottage. Here it is verbatim et literatum:
"Bill & me were driving back from Lindsay one night after consuming quite a bit of beer, we were driving his new Chev Impala convertible. Bill was driving a little fast and I must say erratic. We hit the little bridge in front of Beaford's cottage called the BeeHive. Broke it all to hell.
The next day when we realized what we had done we decided to repair it. All the guys pitched in and we consumed a few pints also.
We painted it white and put the Beehive on it in Pink also drew a picture of a beehive.
We carried it with one of the guys laying on it to the Beaford's cottage and laid it in place.
A good size crowd gathered and we received a warm welcome."

September 14 - 21, 2019 is all set up for a nice cottage outside of Saskatoon where we'll continue just like fifty years have never passed.