"We The People" The Declaration of Independence July 4, 1776

"We the People of the United States, in order to form a more perfect union, establish justice, insure domestic tranquility, provide for the common defence, promote the general welfare, and secure the the blessings of liberty to ourselves and our posterity, do ordain and establish this Constitution for the United States of America." So sayeth page 13 of this mightiest of declarations.

A Declaration that has stood the test of time, created opportunities for millions of disparate peoples from around the world, grew to represent perhaps the finest Democracy known to man, defended the sovereignty of nations under attack during war and peace, and perhaps more than these, gave mankind a direction to seek and follow its dictates, all written and spoken long before the Age of Reason, Enlightenment, Prohibition, World Wars, Television, The Internet and Social Media by the likes of John Adams, Thomas Jefferson, Benjamin Franklin, Robert Livingston and Roger Sherman; the writing was delegated to Jefferson. 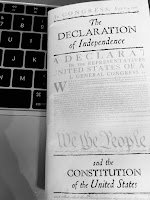 (This booklet was printed in 1776 using master journeyman skills and I photographed it on an Apple MacBook Air keyboard with an iPhone 8 telephone.)

This smallish pamphlet was given to me by my brother-in-law Buster McAfee who is an American reaching the ripe age of 79 and feisty as ever. We have had a few political discussions, not the least of these are current and about Donald J. Trump the 45th President Of The United States.
We are not alone; the world is engaged in wonderment at the antics performed by #45 every single day. The Media is all over him day and night. Night and Day he is the one focus that grips the nation, the people, and yes the rest of the world just waiting for his pronouncements from left field, and wanting these wads of excrement to stick on the walls of his confused and bewildered Administration, as well as the Congress that was created by learned, capable and gifted gentlemen of the 18th Century who must be turning over in their graves at the site of this mayhem.

Allow me to close this blog with another man's words that sum up the why, the where, the who, the what of the people who wish to make a more perfect union:

"The first thing that you need to understand about Trump is that he is not and never has been a successful business man, he is, at his core, a con man with no empathy. Therefore, he assumes that all other people are also con men with no empathy, and every exchange of goods and services that exists in the world is, on some level, a con.
Trump assumes every transaction in the world — between people, businesses, nation-states, even between two different agencies of the same government — has a winner and a loser, a scammer and a sucker. He believes if you're not ripping someone off, you're getting ripped off.
From an economist's perspective, this is complete nonsense. Unless there are major information asymmetries or distortions of market power, and often even then, most transactions are generally to the mutual benefit of both parties. Otherwise no deals would ever get made.
But Trump — the man who created a fake university, made promises and then stiffed contractors, some of whom went bankrupt, hired the mob, and filed for bankruptcy six times — cannot believe this. So he goes out of his way to cherrypick how he sees the world, He doesn’t actually work and produce a building or an enterprise but when his minions get it done he assumes credit and puts his name on it. So everything he does looks like either a ripoff or a steal. This is why when his enterprises get into management difficulties he shuts them down or goes bankrupt. He is not a businessman but an actor playing a part, unreactive to reality.
He is a fabulist “ 1. a person who composes or relates fables. 2. a liar, especially a person who invents elaborate, dishonest stories.” In his “reality acting” and his business persona he lied, to one side and then the other and when called on the lies invented a third lie or blamed the difficulties on subordinates. Now that what he does affects the world, his unthinking reactive deeds can affect both our own country and those of our allies, and done badly, help our enemies, he is at a loss why other people aren’t smart enough to bow to his “gut”.
The next thing to realize is that Trump has lived almost all of his life in a bubble which shields him from the negative, allowing only adulation to come through. All of his decisions were the right ones, his responses are absolutely charming, everyone who meets him is overwhelmed by his charm and grace, his diplomatic skills and his understanding of the world. Even on both sides of an issue he expects to be respected and loved. The bubble tells him so.
It's not simply that Trump *doesn't* think the Paris Climate Agreement, Iran nuclear deal, TPP, NAFTA, or luxury cars from Germany are a good deal for America. It's that he can’t think that. It's an alien concept to him that a deal other people want with us could also help us. This is why he will continually have problems with world trade.
To Trump's mind, the mere fact other countries sought out these deals with us, and that their own economies benefit, is unassailable proof we got ripped off. He can't see the evidence they helped us too. His mind will only cherry-pick potential ways it could be bad for us.
This is why Trump will never, ever, be able to negotiate with the rest of the world. He doesn't believe in mutual benefit. The second anyone tells him "this is your end of the deal" he'll rip it up. He believes only one party can have a good result at the end of the deal, and it has to be him.
So folks, I hate to tell you this, but he's only getting started. He will forego billions, maybe trillions, of dollars in world trade. He will alienate our friends and embolden our enemies, he will manipulate the economy to look like he’s successful and when things fall apart he will blame everyone but himself, just as he’s always done.
Bottom line, he’s an actor playing a president. He has never really done a job and now it really shows. He proposes things like infrastructure but doesn’t have the tools to follow through, hence a series of aides (directors) who tell him what to do. People like Li and Kim, Putin etc, who do know what they’re doing, play him like a fiddle."

Enough said. The writer I have copied word for word was James Lacy Ph.D. Economics and Interdisciplinary Studies.