February 3, 2019
A Rogers' technician will be here between noon and 14:00 to do the installation. We have been promised reception and quality performance beyond anything experienced to date, and, at a savings of $40 per month. This will be something to write about at a later date.

February 8, 2019
The technician arrived 2.30 hours late on February 3. He apologized and got into the task and in no time three sets were wireless and ready to go; all with only one different remote for each of three tv's, as per our request. He gave us a demo and we were totally onside with the new technology. When he left everything was GO.
Because we wanted to subscribe to the App called CRAVE that has 'Game Of Thrones' we called Rogers to add this and the Comedy channel to our account. In the middle of the conversation the set in the bedroom froze up. The operator we were speaking with could not help; she added the new stuff and passed us to another department.
They suggested several things (replug this, unplug that, press this and that button) to no avail, all the while I kept saying, "How come everything worked perfectly until the technician left our front door and building?" They had no answer and suggested we get another technician in with these words following, "If he finds that there is something wrong with the TV--not the installation--then there would be a $50.00 charge." I was livid but controlled.
The new man arrived two days later and attaches the cable to HDMI 3 instead of HDMI 1 and uses the TV remote (not the brand new Rogers' remote) to turn on the TV. I said, "What's this, we only want the Wireless remote that the first technician said everything works from one only, just like the other two TV's?" The second man insists that the Insignia TV is obviously different from the Toshiba and the Samsung. I put it to him four times also to no avail. He left and that's the way it is.
The reception is marvellous; the PVR is exceptional at no extra cost; the fast forward and backward is perfect; yes, and so are the rest of the Ignite systems. All at $40.00 less than our existing contract. After a month or so the first technician said that the cables that run all over the apartment can be tossed out. Maybe we will. 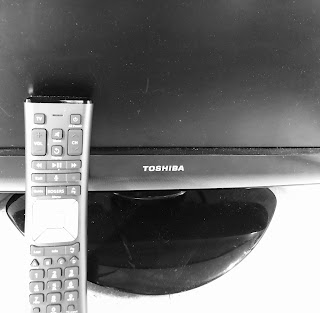