We are registered on Air Canada's early morning flight to Cancun and on to Playa to spend two weeks   with Suzanne Laferrier. This trip popped up right out of the blue, and we wasted no time agreeing to go from March 15 -- 29 because the loads were quite agreeable. And then the unthinkable happened. A Boeing 737M8 goes down killing 157 people in Ethiopia. Its destruction mirrored another fatal crash involving a Boeing 737M8 killing all onboard (189) only five months earlier. One by one, and then a large group of world wide airlines grounded their 737M8's. The USA grounded theirs the next day and Canada grounded Air Canada's fleet of 24 aircraft and Westjet's 4 aircraft only moments after. Both the US and Canada, twenty-four hours earlier, had stated that everything about the 737M8 checked out and was fit to fly. (What one can read from their stated positions is pilot error was to blame.) Oddly enough the two planes experienced the same issues: within seven minutes of takeoff the planes stopped climbing and went down.
As of this writing, the loads on board Air Canada are not looking too good. They have a big job meeting passenger requirements with 24 fewer planes and 4,800 fewer seats in their service.
It appears that March 17 is our window to fly to Mexico; the following was posted on FB:
"To Playa del Carmen we will go
The Mexican Pesos will surely flow.
We'll see you soon,
Adios Amigo."
Dear Readers, the above is the first poetic insertion to my blog. It's not the best, perhaps I will work on this, perhaps I won't. 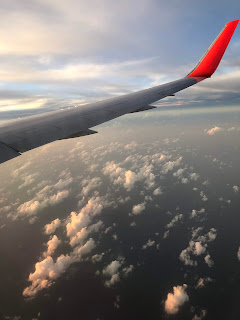 [Tragically, 49 Muslims where shot to death while praying in their Mosque in Christchurch New Zealand on Friday March 15, 2019. The shooter (alleged to be Brenton Tarrant from Australia) is said to be a White Supremacist who has publicly declared Donald J Trump his hero. This news flashed around the Globe and politicized the event while certain pundits had previously drawn attention to Donald Trump's acquaintance and discussions with the CEO at Boeing.]

We are in Playa del Carmen at the Condominium 'Natz TiHa' with Suzanne LeFerrier and Dennis Oliver in a very nice room overlooking the pool with an ample kitchen and living/dining room leading out to a large balcony. This place is very comfortable, the singular issue I have is the 45 stairs up to our condo. LaBrioche is a quaint coffee and crescent place a few minutes up the road with numerous restaurants and boutiques selling typical Mexican trinkets that we've managed to avoid at this point. At the bottom of our street is the Gulf of Mexico in all of its glory. The swankiest place we have  visited must be the Grand Hyatt Hotel. 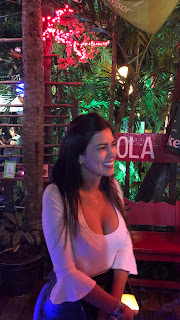 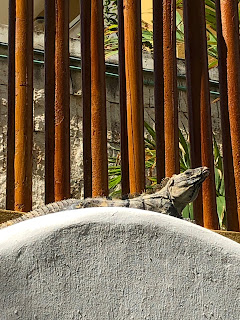 The above are representative of two of my favourite greetings. The iguana in the morning right outside our front door, and a dining room hostess just up the street.

Playa del Carmen is fifty minutes west of Cancun (on the ocean), opposite Cozumel Island, and several hours east of Belize. There is a nice mix of foreign and Mexican vacationers spending plenty of time walking and biking on pedal and motor scooters. The dress on our street is mostly bathing suits (with cover ups) and sandals. There is a balanced mix of ages here as well. The sellers on the street have their treasures, as well as their little children spread out on blankets on the roadways, these of course, are designated as no vehicular traffic on slightly narrower roads. Several, if not a majority of vendors use a humorous banter like, "Honeymoon Special or Come on in 99% off" virtually every time you pass. This is a very friendly place with lots to explore. 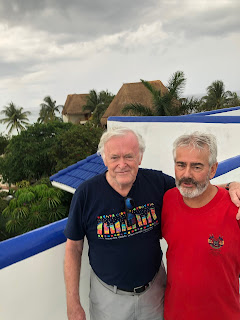 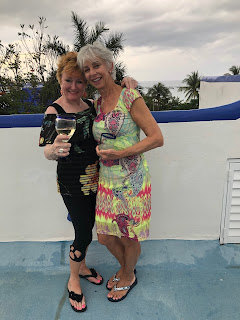 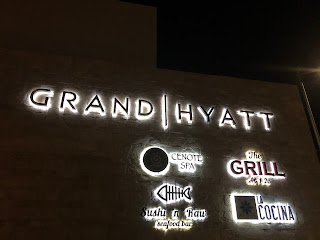 Terryl has purchased some fabulous ingredients for Crescent filled sandwiches to go along with our $5.00 bottles of wine and $1.00 cans of freezing cold beer. But every night we hit a different restaurant for dinner. The next morning: