21 Rules for Life by Jordan B. Peterson published in 2018

The name Jordan Peterson and his philosophy has over 100,000,000 viewings on You Tube and up to a month ago I had never heard his name or heard him speak. Dr. Peterson is a gifted lecturer with a light touch of humour winding through his philosophy which was originally given at Harvard and then University of Toronto when he was asked if he ever wanted to write a book? He had written one several years ago; but now with prodding and refining he would write another that put him squarely onto the world stage. 21 Rules for Life: An Antidote To Chaos is in the public domain.
On April 18, 2019 I have begun to read this book with a forward by Norman Doidge whose friendship is significant as are his comments on his friend's book. On page xx he says this:
"Intolerance of others’ views (no matter how ignorant or incoherent they may be) is not simply wrong in a world where there's no right or wrong, it is worse; it is the sign you are embarrassingly unsophisticated or, possibly dangerous.” And who are we reminded of? I would suggest Donald J. Trump; he certainly jumped into my mind, and on America's mind and News Media since Trump's election as President in November 2016.

[The above excerpt from Peterson's book was read by me at a time in US politics when the word 'impeachment' has once again raised its judgemental head. In short, the Mueller Report (redacted as promised) is in the hands of Congress and the media are all over it.]

Over the Easter weekend at Gerald and Aimee's discussions of several types, including Donald J. Trump took place and a good time was enjoyed by the family. Now, get on to this book.

April 29, 2019 in Shawinigan with Greg, ML and the boys and getting ready to fly home tonight.
Page 53, "Do you want your children to be safe or strong."
Page 63, " You must determine where you are going, so that you can bargain for yourself, so that you don't end up resentful, vengeful and cruel. You have to articulate your own principles, so that you can defend yourself against others taking inappropriate advantage of you, and so that you are secure and safe while you work and play."
I like the above quotes but there is nothing new for me here. I'm expecting more, more than several pages at the book's beginning on lobsters parading and bullying other crustaceans on the Ocean floor and driving the female lobsters into a frenzy to get the big guys attention. Mating is big thing here and on the Earth's surface for mankind and I'm sure Peterson will get into more of this as we read on.

Rule Three...Make friends with people who want the best for you.
Page 75, "People create their worlds with the tools they have directly at hand. Faulty tools produce faulty results. It is in this manner that those who fail to learn from the past doom themselves to repeat it. It's partly fate. It's partly inability. It's partly ...unwillingness to learn. Refusal to learn? Motivated refusal to learn?
Page 81, "Success: that's a mystery. Virtue: that's what's inexplicable. To fail, you merely have to cultivate a few bad habits. You just have to bide your time....Things fall apart, of their own accord, but the sins of men speed their degeneration. And then comes the flood.

Rule Four...Compare yourself to who you were yesterday, not to who someone else is today.
This makes sense to me because we can make incremental changes on a daily basis, and the comparison on a daily basis is viewable due to the short term analysis.
I'm currently on Rule Seven and will give Peterson a six out of ten so far. But read it fully is my goal and it will be done.

Rule Five..Do not let your children do anything that makes you dislike them.

Rule Six...Set your house in perfect order before you criticize the world.

Rule Seven.., Pursue what is meaningful (not what is expedient).

Rule Eight...Tell the truth--or at least, don't lie.
There's a place for little white lies but it's a small place and should be avoided if possible.

Rule Nine ... Assume that the person you are listening to might know something that you don't.

Rule Ten...Be precise in your speech.

Rule Eleven...Do not bother children when they are skateboarding. [It can be dangerous but they need the challenge now and on the skateboard of life.]

Rule Twelve...Pet a cat when you encounter one on the street.

'There are millions of dead facts; the Internet is a graveyard of dead facts. An idea is not a fact. What can one make of that?'

'Women don't want boys, they want men. They want someone to grapple with. If women are smart they want someone smarter; a situation were it is sometimes difficult for them to find mates. If you think tough men are dangerous, wait until you see what weak men are capable of.'

I'm closing this blog by stating Peterson's book is definitely a worthwhile read and have given it four and a half stars. The book will be returned to the Library next week. I found it beneficial to record several passages. Two of those are printed above with quotation marks. Peterson details his young daughter's difficulty with arthritis beginning at age six and lasting through several joint replacements and physiotherapists that shed a light on her problems usually beginning at 80 or so years of age. Tammy and Jordan Peterson have had a marriage that, like almost all marriages, needed work from time to time, and he writes about the cause and cure. Their young daughter is now married with a child of her own. Peterson writes with his gifted pen of light hoping that he has been able to help others understand the balance between Chaos and Order that exists for humanity past , present and future. Oh, I almost forgot: Peterson analogizes Women with Chaos and Men with Order in an early passage of 21 Rules...Think about that one Ladies and Gentlemen. 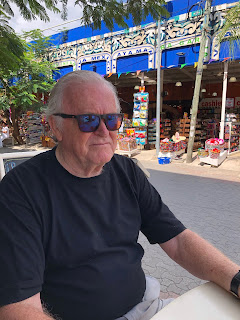