The home of The Championships have spent 90 million pounds installing two retractable roofs on the main two courts. Why? Because it rains a lot in London, England. During the last fortnight there was nary a drop to be seen. What was in evidence was that the big three in the men's draw: Djokovic, Federer and Nadal still have what it takes to make it to the semi-finals. And the Open knew it. They were seeded one, two and three.
The Ladies Championship was contested yesterday between long-time multi-winner Serena Williams and Romanian Simona Halep who had won the Rolland Garros French Grand Slam in 2018 for her first Slam. Williams' career is in the books as perhaps the best female player of all time, and probably the most tempestuous too. On this day Williams was destroyed by Halep 6 - 2, 6 - 2 and was broken four times. Halep played like never before - she was in the zone - and she knew it by blowing shot after shot past Williams for out and out winners over the 58 minutes it took to complete the take down of the American super star. Williams was not prepared to withstand the onslaught and said so in the post match interviews with comments like, "She played out of her mind" and "I don't know if she will ever play that well again." (Serena Williams, it's sad to say, has never been a favourite of mine, can you tell?)
This morning Federer and Djokovic will play for The Championship. If Roger can bring the game that he has had in the past this should be one for the ages. His match against Nadal was worth its weight in gold with Roger winning in four sets. (This was their first meeting at Wimbledon since 2008 which was reported by the infamous John McEnroe to be the finest tennis match ever played.) I'll be watching this one on July 14, 2019 from start to finish.

Roger and Novak battled for 5 hours in perfect weather and it came down to the first time ever when the fifth set would be settled with a tie-breaker, and it started when they reached 12 all in the fifth. This shot was taken when you see the score was 4 to 2 for Novak in the fifth set tie-breaker.
The palpable tension filling the stadium when Roger needed two consecutive points in the fifth to win the Gold Cup and couldn't do it, and then Novak had the same edge and couldn't get it done, is one reason why Wimbledon changed their rules and created the fifth set tie-breaker beginning at 12 all.
The final struck ball was a frame shot by Roger that flew straight up and out of play, and with that Novak claimed his 16th Major and Roger stayed with 20 Majors: the all-time Men's record in the open era.

Another day later in my favourite Canadian newspaper Cathal Kelly has written about Djokovic's 'lack of love from tennis fans' and their obvious love for Roger. Even in the Royal Box the Prince and Princess appear to show their love for Roger more than Novak. Rather than dwell on his point -- a real one that I feel as well -- it's worth adding to my post. I hope you enjoy reading this opinion which paints another picture of what's it like at the very top of sporting life and love for that expertise that brings rare individuals into or out of the hearts of sports fans world wide:

"After he’d won a classic in front of a crowd that very badly did not want him to, Novak Djokovic didn’t bother celebrating.
Instead, he turned slowly and took in every section of the Wimbledon Centre Court audience. His expression might best be described as a smirk. He’d shown them.
Sunday’s men’s singles championship against Roger Federer ended in a thrilling five-set match. At 4 hours 57 minutes, it was the longest final in the tournament’s history.
The Serb proved two things over the past two weeks – that he is the least-appreciated, least-loved great player in tennis history; and that he may soon be the greatest of all.
Mr. Djokovic is a perfectly nice guy who does and says all the right things, but for whatever reason is unable to connect with people. That was evident through every part of the final.
The audience roared for Mr. Federer throughout. Not most of the audience. All of it. Even the attendees in the Royal Box, who are expected to be above sporting partisanship, were up on their feet over the course of the match.
When Mr. Djokovic double-faulted early on, there was a smattering of applause. When he tried to argue a call during the tension at the end, he was roundly jeered. Once it was done, the winner got conspicuously less of an ovation than the loser. Mr. Djokovic prevailed 7-6 (5), 1-6, 7-6 (4), 4-6, 13-12 (3).
Usually an effusive on-court presence, Mr. Djokovic’s response at the end was to fold into himself. No fist pumps; no shouts toward his box. He didn’t fall to the ground or hold his head in his hands. He walked straight over to Mr. Federer for the handshake. He looked in a hurry to leave.
“It was mentally the most demanding match I’ve ever been part of,” Mr. Djokovic said. “This was a different level. Because of everything.”
He didn’t need to explain what “everything” meant.
For all his reaction, you’d have thought it was a first-round match at Indian Wells, not his fifth Wimbledon championship, which puts him level with Bjorn Borg.
Despite the way the crowd had treated him, Mr. Djokovic tried to reach out one more time during his postmatch speech.
“This has always been the tournament for me, that I wanted to participate …” and told a story about making his own Wimbledon trophy as a child. He seemed to be either holding back tears or unsuccessfully willing himself to cry.
The crowd wasn’t moved. They were still too busy feeling sorry for Mr. Federer.
This is where you list off all the things the Swiss has and is doing that are remarkable – in a final 16 years after he first won this event; still working at an elite level at nearly 38; having to go through the two other best players in history (Rafael Nadal and Mr. Djokovic) in order to get there.
But if this match lives on in the Federer legend, it will be as his most spectacular bust. He had two consecutive championship points in the late going. He missed both.
Few pros are more gracious in defeat, but it was clear this one hurt. In his postmatch on-court interview, it was suggested to him that he’d given viewers something “we will remember forever.”
“I will try to forget,” Mr. Federer said.
He laughed as he did, but it was a little too on the nose.
Given a chance to liken the match with his 2008 Wimbledon final classic against Mr. Nadal, Mr. Federer passed.
“I’m the loser both times,” he said. “That’s the only similarity I see.”
Although tempting, there is little comparison with a decade ago. That match was a street fight. Federer v. Djokovic 2019 was more of a shoving contest. A back-and-forth tactical battle that didn’t get truly tense until the final moments.
Some contests are all over the place. This one was very reliably in one place, with Mr. Federer trying to pick his spots and Mr. Djokovic doing his human Pong routine.
As such, people won’t remember Mr. Djokovic’s victory. They’ll recall Mr. Federer’s choke.
See? Even when the Serb wins, he loses a little.
Afterward, Mr. Djokovic gave a rambling news conference. He didn’t seem happy, exactly. When he was asked about the crowd’s reaction to him, he straightened up in his chair and put both hands in his jacket pockets.
“At times, you are trying to ignore it. Which is hard,” Mr. Djokovic said. “I try to transmutate it. When the crowd is chanting ‘Roger,’ I hear ‘Novak’ …”
It was a good line and got a laugh, but he couldn’t leave it there.
“… It sounds silly, but it is like that. I try to convince myself that it’s like that.”
This poor guy just can’t help himself. Even when he’s doing his best to play it cool, he ends up trying way too hard. It’s his nature. It’s that neediness that seems to put people off Mr. Djokovic. He may never stop talking about the vegan lifestyle, but mostly he’s corny – the postmatch hands-from-the-heart routine; the grass-eating once he’s won.
There’s an irony in this. Every top tennis player has their image built from scratch by corporate backers. Just look at the gawky, pony-tailed weirdo Mr. Federer was 15 years ago, and the 007-with-a-racquet he is today. That didn’t happen because he got a subscription to GQ.
Mr. Djokovic has none of that polish. The guy you are getting is pretty obviously the real guy, including all the oddness and discomfort. But it’s his realness people hold against him.
What they can no longer ignore is his place among the Big Three, with Mr. Nadal and Mr. Federer. Mr. Djokovic is now the biggest.
He’s won four of the past five Grand Slams. He’s moved to 16 for his career, two behind Mr. Nadal and four behind Mr. Federer. After a long injury-abetted wobble a couple of years ago, he now has those targets properly triangulated. In his current form, he may top the list inside two years.

He’s already up on tennis’s Mount Rushmore. Mr. Djokovic’s search for greatness is done.
Now he can resume looking for the love that’s supposed to go with that."" 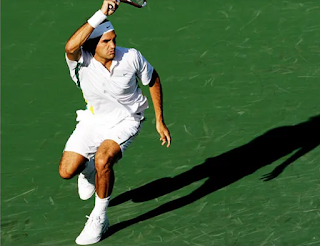