I'm booked and checked-in on Air Canada's #1123 at 11:00 on September 14 arriving at 12:33 to begin (I'm guessing now) our 23rd reunion since John DeLisle convened the first one in 1995. Many a tale has been told and retold since the mid 1960's when it all started in Thurstonia Park on Sturgeon Lake where a small, less than glorious, cottage was our weekend retreat. I think there were 12 guys who formed the original group, with Arch, Bill and me signing on for life a couple of years later. (We were the old guys who were allowed to hang out when some of the younger decided their weekend-time would be better spent elsewhere.) That roster remains to this day except for Pat and Arch who passed away rather suddenly. Jack, Phil and Paul have been replaced by Rod, Eric and the odd mystery guest (one named Piggy comes to mind) whose sudden appearance illuminates our gatherings from time to time. Our yearly experience seems to stay ignited by regular emails about horse races, football pools, birthdays, trips to the hospital and other remembrances of special occasions like anniversaries and a whole lot of times that make up the constant mix of our lives well lived.
I've told our story to many friends and, to a man or woman, they marvel at what we have been able to achieve and maintain for fifty-four years. Oh yes, the title 'CCCottage Reunion' was uttered by cousin Bill who stuttered a great deal as a youngster, but now reaching for 80 years his voice's ability has improved considerably.
September 14, 2019 everyone arrived with generous man hugs for each other and we piled into cars and set off for Emma Lake which is about a two hour drive north of Saskatoon and deep into a land of many lakes and wild life. We passed Elk and Deer and a coyote or two before settling into a very nice cottage donated by a friend of Ted's at zero cost to all of us. The food and drink had been purchased on Friday; the fishing and golf equipment was stored in three SUV's. Dinner was prepared, eaten and cleared away for the poker game to follow. The rooms had been assigned and the older guys got their pick, and why not? That evening the writer was awarded the "Gary McDonald Come back Award" as its first recipient. I was moved by the generosity afforded me and expressed the hope that we all live for a long time and enjoy many more reunions in far off wondrous places.

Monday arrived and we golfed at Waskesiu Golf Club in a National Park, a place of awesome beauty blessed by the desire to be maintained by the citizens and their government.

On Tuesday we rested; some went to Prince Albert the home of John (The Deif) Deifenbacker -- a former Prime Minister of Canada in the 1960's -- and entertained the Casino dealers with a generous contribution to their cause. On their return we headed back to Waskesiu to dine at Pietro Restaurant a nicely appointed dining facility with Gary the owner and Gary the waiter attending to our comfort and enjoyment for the evening. 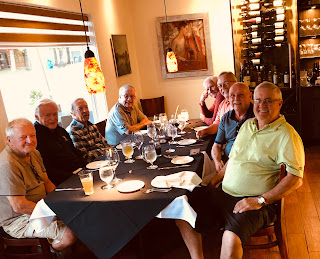 On Wednesday golfing at Emma Lake golf course was a very nice local venue where we enjoyed a two-man scramble with the lowest score of 75 shot by Mike and John. Larry and I were 85, Dan and Tom 82, Ted and Bill shot 76.
The fish fry will start at 7:00pm around an open fire pit and oven mitts will be available. 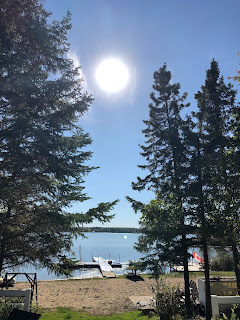 On September 20, 2019 the sun rose between three of the millions of trees surrounding Emma Lake and the cottage we shared courtesy of Ted Merriman's friend Peter Kilborn.

During our week of golfing, fishing and poker games made more memorable with the usual kibitzing and stories told and expectedly retold because they are the foundation that unites us under The Cccottage Boys now and for as long as we want. Let the end not be in sight for years to come.

And the week ended with a dinner and a hockey game between the Prince Albert Raiders and Saskatoon of the Western Hockey League in Prince Albert.

After the reunion, on September 24, 2019 my darling Terryl wished to email The Cccottage Boys the following:
"Dear Cccottage Boys:
Thank you so much for thinking of us girls with these absolutely beautiful shawls. Ted, I think you initiated this lovely gesture. I love, love my gift. It is my prize possession and will always travel with me.
Thank you Josephines Dreams and Ted.
Love Terryl"