Terryl and I planned this get-away two weeks ago. We'll be at the Inter Continental Hotel in Vienna's Innere Stadt enjoying the scenery and cultural pursuits for the first time for me, but not for her.
Our flight had plenty of J Class seats at first but now it's down to two with two ahead of us. However, there are business class still available so we should be okay as of October 9, 2019. I'm having an egg sandwich and getting ready for my Wednesday golf game with Sandy's group at 11.00am.
October 10, 2019 The 'loads' quickly went into the tank: there are 31 cons listed with 18 ahead of us which means we'll be flying economy to Vienna (and hopefully up front on the way home October 16).
After a fabulous ride on AC's brand new 787 Dreamliner we land in Vienna and in no time at all we are in a cab and on to the Intercontinental Hotel where we expect a room four hours before our check-in. In every way and place the people of Vienna are charming and efficiently agreeable. It's a beautiful sunny day around 20 Celsius and after a two hour snooze we are on foot with a map and a few ideas for the day. Walking here is fantastic with its boulevards for pedestrians (only) complete with cafes, shopping and restaurants in and out of doors. I'm sure there are professionals operating like Freud up stairs in these magnificent concrete buildings - some with artwork reaching for the roof - that have been maintained as clean as a whistle. One of Terryl's memories is the Purstner Restaurant for - you guessed it - schnitzel, ribs, beer and wine. It was terrific, and once again our waiter was all over us with help and kindness. The balance of the day we walked and enjoyed the sites before having a nightcap at Kudor and on to the hotel for a good night's sleep. 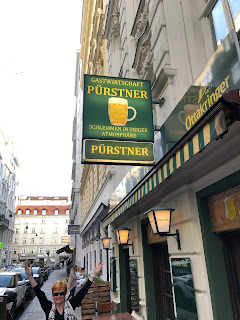 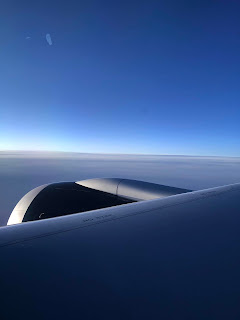 October 12, 2019 We had mentioned George, the current concierge at the Intercontinental Hotel, spoke of his father who was the concierge in the 1970's. Well he showed up this morning and he and Terryl had a great yack about those golden old days. Apparently, 40 years ago he was out partying with the Air Canada crew and all of them had lots to drink. Carl told us this morning it was right after that night he gave up drinking. Here's Carl and one of his favourite airline people: 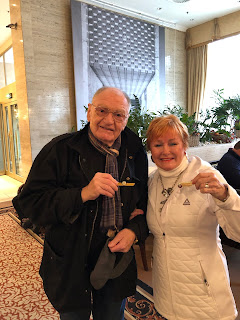 Right after that we went for a large walk and bought Opera tickets for Monday night at the Strauss & Mozart Konzerte; and a little later we bought Opera tickets for Madama Butterfly by Giacomo Puccini at the world famous Wiener Staatsoper for tonight's performance at 7:30. For lunch/dinner we ate at the world famous Zum Schwarzen Kameel.
The Opera House was a blinding success: the building and the services are incomparably magnificent. However, our seats in a six seat private box were less than ideal which is what we were led to believe outside the theatre that afternoon prior to purchasing. For example, seats 1,2,3 and 4 allowed a clear site line to the stage as well as the orchestra pit. Seat 5 and 6 (our seats of course) did not. But we sucked it up and enjoyed Madama Butterfly in Vienna, Austria the home of music and a most magnificent city (voted the world's most livable city for the tenth consecutive year.) 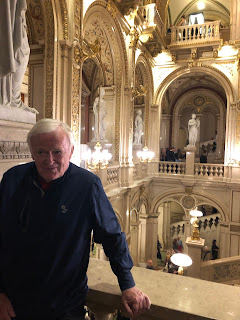 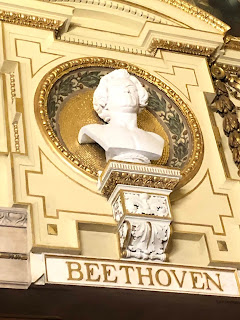 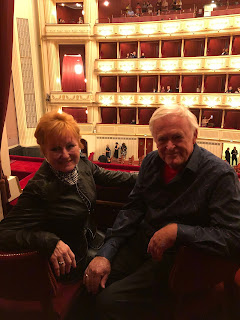 On October 14, 2019 we woke early despite knocking off 4/5 of a bottle of Laurent-Perrier Maison Fondee 1812 Champagne, and prepared to visit the Naschmarkt, a wonderful place filled with shops and dining of almost every variety known to man. 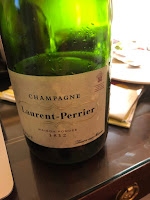 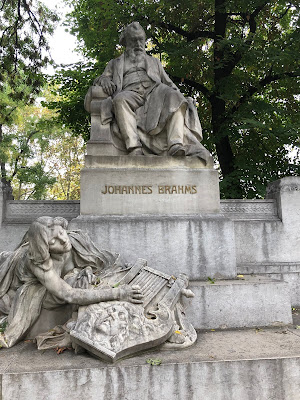 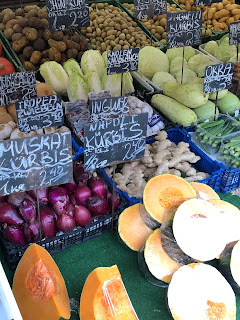 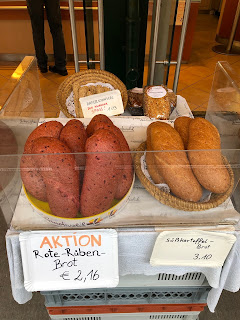 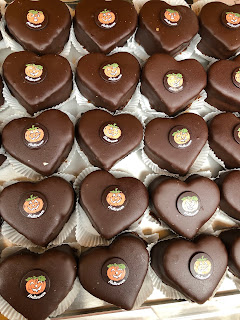 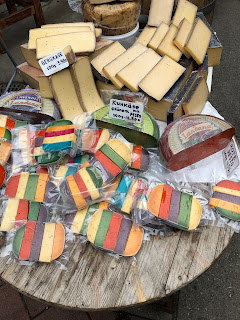 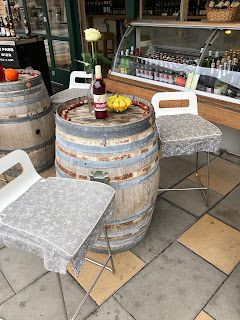 After the market we rode the red and then the green line bus up to Grinzing Wineries in the famed Vienna Forests where the Swells summer and relax. Beethoven, a wild man with his music toiled over his compositions until they were just right, had spent loads of time doing his re-writes until perfection was reached in Grinzing. Mozart, on the other hand, sketched his off the top of his head and never re-wrote a thing. I wonder whose inspiration was a result of Grinzing wines? 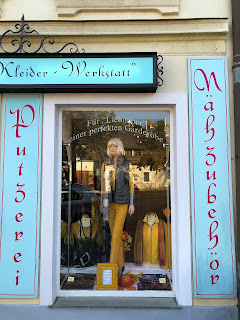 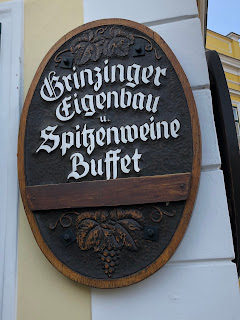 After missing the third last bus we roared down the mountain to get back to The InterContinental Hotel to ready for the magnificent Mozart and Straus evening right across the street from the hotel.  (Please click the previous link for a look at the artists and theatre: spectacular is the only word.) What a treat this was: the building is a palace, 15 piece orchestra, a Soprano, a Tenor and two ballet dancers firing on all cylinders made this a memorable night on October 14, 2019. 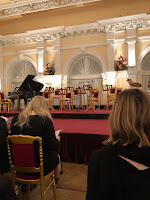 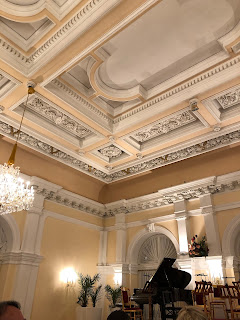 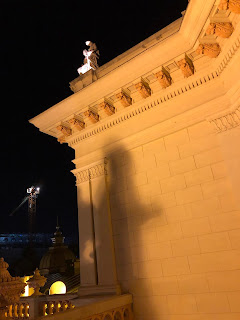 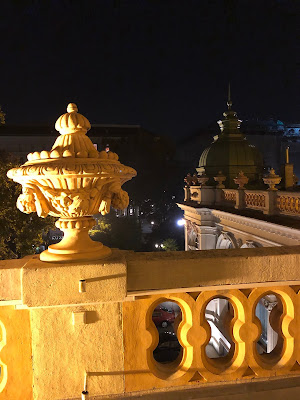 October 15, 2019 we loved the Cafe-Restaurant Landtmann for its comfort and simply the best organic boiled eggs and breads served with tasty jams and juices. Terryl's eggs were served with a halved Avocado and watercress, in her words, "To die for."
Now we're off to a market that really didn't excite us so we quickly walked up to the Kärntner Strasse on of the most magnificent all pedestrian boulevards we've ever experienced. After several hours gawking, complimentary cheese tasting courtesy of Cheese&More, relaxing with a beer while Terryl launches into a shopping extravaganza, we set foot, body and soul to Purstner Restaurant - once again - to dive into a rack of ribs, grilled potatoes and assorted dips while Terryl revels with a Cordon Bleu that the waiter said, "You'll love it and don't order the Gulash, Gustav Mahler never did." 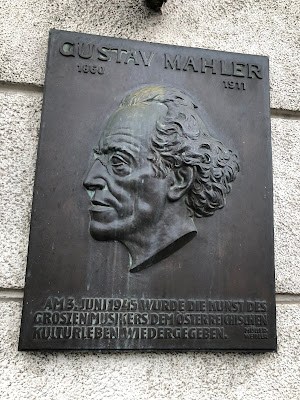 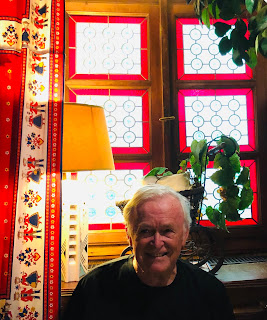 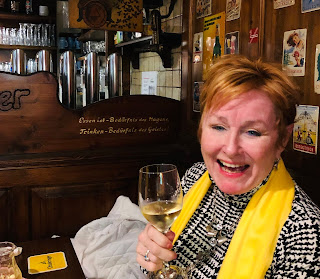 So long Vienna, we enjoyed you immensely. We hope you opened the Links to the highlighted websites to get a larger view and appreciation of these wonderful establishments.