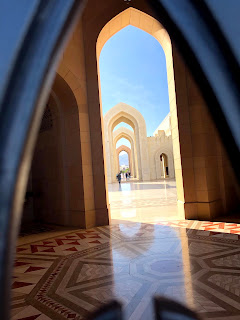 December 24, 2019
Last night was an amazing evening compliments of Azamara Cruise Line that bussed us to Muscat's huge new Convention Centre by the Airport. Once again Captain Filip greeted us as we entered a magnificent auditorium to hear a five piece authentically Muslim band, followed by fourteen piece brass band, both playing their favourite works to the delight of all who attended. In a little over an hour we drove to the ship where the party had already started with more food and music and drinks to be had in several venues.

Today Terryl and I shuttle-bussed it back to the Souq to purchase a few little goodies and immediately were at a loss to find the store of choice: a gold shop with our ears, necks and wrists begging to be adorned. Alas, I gave up and walked out of the Souq with the guidance of many vendors, and when seated with a drink Terryl went back in and then, came out fourty minutes later claiming no success once again. Now we're on the ship - have had a nice little lunch with refreshments - and preparing for the sail away at 17:00 and of course, the party to follow. In about sixty-four hours we'll dock in Mumbai, India.

Last night, Christmas Eve, Terryl and I agreed to meet Jamie for a drink followed by dinner at the Discoveries Bar and Dining room. This time he was there and we easily launched into another spontaneous and lively discussion about life, illnesses, family and cruising. Jamie is the same man we had drinks with very early in this 11 day cruise to Mumbai. When we stood to announce our readiness to dine Jamie says, “We’re five for dinner please.” Terryl and I looked at each other with surprise that we were now five. These two additional gentlemen were not; Jamie had prearranged that too. So off we go and when seated Roberto and Alfredo introduce themselves as did we. They are originally from Cuba and have been living together in Miami for twenty years. And of course they were pleasant and well spoken with their cuban accent still in evidence. The food was wonderful and the service was even better. Just before the main course was brought to our table Jamie excused himself and said he was a little tired and was going to his cabin. The four of us finished the dinner together and departed as friends.
The show last night was a little like an old fashioned Bing Crosby family gathering with all kinds of performers on stage singing, playing guitars and telling Christmas stories until well into the night. We were tired by 23:00 and went to our cabin just before midnight.

This morning a beautiful Christmas Brunch was laid out in the Discoveries Dining Room where we enjoyed Crab Legs, Lox, Lamb Chops, Fruits and so much more all presented beautifully under an Ice Sculpture slightly higher than head high. Another start to an Azamara day at sea where the temperature has been a steady 25 degrees Celsius and sunny since we landed in Dubai fifteen days ago. Many of our fellow passengers will be disembarking and heading for the Mumbai Airport on December 28, but not us, we have 38 additional days before we fly to Dubai from Cape Town, South Africa on Emirates Air and then to Toronto on Air Canada.

Last night was one where both of us were tired - we really wanted to be alone together - and had a very light dinner on the outdoor Patio which is always a delight. I had an appetizer of Carpaccio artistically prepared especially for me, and Terryl had a tiny piece of chicken providing the energy required to take the elevator to our cabin. There is a music only channel on our Television that did the trick and we were asleep in no time.

This morning we got up at 08:30 just in time to get dressed and out on the Pool Deck to see (with special glasses provided by Azamara) the complete Solar Eclipse, an episode that lasted two hours with the maximum effect visible at 09:15. The Deck was full of passengers with a staff member describing the visual effect in technical detail. I did take several photos but could or should have made iPhone settings, if possible, to get the most dramatic effects.
Professor Chuck Richardson lectured at 10:00 on ‘Mumbai: Gateway To India’ complete with his photographs yielding a valuable precursor to our visit scheduled for December 27, 2019. His delivery was as expected dotted with explanations of population, poverty, working children, and of the very wealthy going about their business in the fastest growing GDP in the world, even ahead of China. The Professor discussed India’s political scene before and after India’s independence from Britain. But most importantly his focus was on their working children who should have been in school, along with the working adult poor’s need for employment which keeps them using ancient tools instead of modern equipment. Why? If new equipment requires one person to do the same task as ten then what would the replaced nine do to earn a living? This is a direct opposite thought process that is used in North American and many other areas in the world. He also instructs that the 80% Hindu population is quite happy doing what they do because the real rewards in life come to them in the after life. Full Stop.
From 14:00 for an hour in the Cabaret the entire singing and dancing team entertained us with fabulous and familiar songs from Broadway Shows. They were terrific and this their penultimate show was performed to a packed house who truly appreciated an extraordinary performance.

This is the day we dock in Mumbai, India at 07:00 and make ready to enter this amazing stand-alone Metropolis of 22,000,000 people. Terryl’s recollections going back to the 1980’s are well known - and they are not pretty. Memories of children with limbs broken and bent begging in the streets, others stealing from your pockets, crushing crowds continuously moving, men lying in the streets, and even dead babies lying in the gutters, and a certain unpleasant smell emanating from everywhere was constant. Terryl recalls gifting pens and little trinkets to give to the little ones, and to one crippled child she and her fellow Air Canada friends gave a set of crutches one week only to find they had been sold to buy food the following week. All sad but true.
Our tour this morning entitled ‘Mumbai on the Move’ declared that things have changed somewhat in fourty years. I recognize that a four-hour bus tour only skirts the heart of a major city like Mumbai, but it was enough for Terryl to state with certainty that Mumbai really is on the move. All of India’s GDP is the fastest growing in the world, even faster than China. The streets are much cleaner, we saw only one man lying down in the street, only one or two children begging, and lines of children walking in formation in school uniforms. We saw much of what has not changed too: prepared lunches arriving by 11:00 via bicycle messenger by the thousands, dozens of men pounding other people’s laundry in cement tubs and then hanging it out to dry in the sun. Both occupations have survived modern process and procedure for decades. One theory is that why replace employment with machinery that only costs more money for electricity, and most importantly, puts men out of work. We were told that more young Indians are receiving better education now more than ever, and that the divorce rate for ‘love marriage’ is going up and up while ‘arranged marriage’ is staying as low as ever.
We toured Mahatma Ghandi’s home (now a museum) to view photographs, letters and events that form and speaks to his incredible life in service to his fellow citizens. Of course there are volumes written on Ghandi: one letter above all that caught my eye was Ghandi’s letter to Adolph Hitler beginning:
“Dear Friend…Friends have been urging me to write to you for the sake of humanity. But I have resisted their request, because of the feeling that any letter from me would be an impertinence…” How wonderful and humble can one man can be?
This evening Jamie dropped by the Spirits Bar and jumped into a last drink with us. Of course he had a few stories, one fairly risqué, mostly about his time in Leavenworth Prison (as a Doctor, not an inmate), which prompted me to launch my 1960 Cincinnati Workhouse Prison escape with John McCusker (you know that one I’m sure) along with its trials and eventual outcome. On leaving us for the last time he handed Terryl a piece of folded paper and stated, “Oh, here’s a message for you.” I opened it and found his name, telephone and email address in Washington D.C. What a class act: Jamie’s way of saying I want to see you again.
That evening we exchanged emails with the Ainslie couple from Vancouver, and the Boyer couple from Dallas, friendly people indeed, and one of the ladies was a former Air Canada flight attendant. How good is that.

This morning approximately 440 passengers disembarked - we were two of sixty continuing on to Cape Town - and approximately 600 coming aboard for this twenty-four day cruise to Cochin, India, two stops in Seychelles, (Kenya has been cancelled due to internal unrest and conflict), stops in Tanzania, Mozambique, and four stops in South Africa with final disembarkation in Cape Town. The crew, including navigational, service and administration is not changing. (It’s nice that we know many of them by face and name now.)
We have returned our last, and received our new room keys, in a seamless process identifying us as back-to-back passengers to begin enjoying the day on board. Terryl and I discussed taking another tour of Mumbai today and decided against it after speaking with fellow passengers who had visited what they call the ‘slum’ area yesterday. After hearing their comments Terryl said, “After 40 years this part of Mumbai has never changed.”