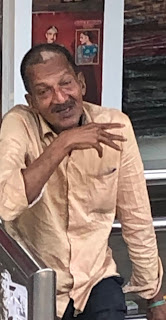 We sailed away from Mumbai last night at 17:00, this visit provided a whole new look into a fascinating culture, one that simply survives in millions of lives, and another where their lot is improving through education and adoption of Western ideas and concepts put into practice.
Terryl made an inquiry at the Spa for which she was invited to participate in a lucky draw. The Gym area, next to the Spa, was crowded and after a few comments extolling the virtues and relaxing feelings their work provides, the first lucky number was pulled and 6075 (our cabin) received a $75.00 treatment. My arms went up and a loud noise of some kind covered the room. Terryl’s name was on the card and she was thrilled and gave a warm and respectful thank you to all those present.
This morning we are cruising south toward the tip of India and will dock at Cochin, India tomorrow morning. The sea is calm, the pollution is gone, the food continues to be excellent along with super service by attendants who know our preferences and react accordingly. Read, relax, enjoy is the name of the game for these 38 hours sailing to Cochin.

Last night we had a drink with Teresa and Tracy Boyer in the Living Room on Deck 10 facing south as we cruised to Cochin. Terryl had met them the other night and invited them for a drink. For one hour the conversation was constant and lively detailing many adventures on the high seas including a robbery at gunpoint in Mexico City. This is not a pretty story; They and their luggage were followed from the airport and pulled over by a look-a-like police vehicle, and with a gun forced into the side of Teresa’s head, were frisked, and verbally accosted while their personal possessions as well as the contents of several luggage bags were taken and loaded into their vehicle. Their passports were not taken. Why? Because these criminals wanted their targets to get back on a plane asap and not report the crime to the real authorities. The Boyers are well-healed, retired for 11 years and have a home in Dallas as well as Mexico, and as of last night have spent the last 99 days on board the Azamara Quest as she travels the world.
This morning, while docked in Cochin we have cleared Indian Customs (again) and will begin a tour entitled ‘Walk the Broadway Market followed by sundowner at Taj Malabar Hotel’ this afternoon at 16:45; this will take us well into the night and then back to the ship. Currently, we are having a cool drink onboard.

Let’s begin with last night: at 16:45 outside the terminal the bus attendants came to find us, because we had not picked up our #10 chest sticker prior to leaving the ship. (I need to tell you that our instructions did not include that little detail - incidentally, the first time this has happened on this trip with Azamara.) So off we go into the city of Cochin or Kochi which ever you prefer, that is teeming with motor bikes, Tuk Tuks (three wheel motorbikes with room for two passengers in the back), buses, few private cars and loads of people with some on the move and others hardly moving. Our Tour guide talks and then the microphone quits, he taps it and he’s off again. His is giving us some of the history of Cochin and the 28 states in all of India. President Modi runs the show but he needs help to do his job for 1,400,000,000 of his fellow citizens, (only China is greater) and he does this with 28 Prime Ministers where some states are richer than others. Hundreds of years ago spices were the number one product India exported around the world with Pepper being the largest and most profitable for India. Today, it’s still the most popular among the dozens and dozens of spices India grows and ships everywhere. Our tour included a few stops, and what I concluded to be about a one mile walk through the narrowest of streets filled with vendors politely selling their goods. For me it was difficult to keep up with him holding his sign over his head, as I continued to drip with sweat while side-stepping the pot holes and loose slabs of worn concrete. Terryl asked, “Are we going to stop and shop sometime soon?” Of course, we’ll do whatever you ask was his reply. In due course no other one person, especially me, really wanted to shop in this local. The end of our tour was a stop at The Taj Malabar Hotel, a quite luxurious hotel on the water with a comfortable sitting area by the water, and nicely dressed waiters serving a nice cold local beer that made my day. After a pleasant rest stop we were back on the ship for a late dinner in Windows Patio.
This morning after a little breakfast we left the ship, and before we passed Immigration a nice young man reached over a small barricade and called, “Gary and Terry I’m here waiting for you.” We went out to greet him and hopped on his  Tuk Tuk and headed for the Old Town past Jew Country (no kidding, it’s still called that even though all have left for Israel and other parts of the world over the last century or more). We were driven to three shops, very nice shops, where the prices were higher, the selections were greater, and the service was friendly with kind words like, “I’m not trying to sell you anything, I’m just doing my job.” After the third shopping stop the driver asked if we’d like to shop for spices, or, if we’d like to go anywhere else in Cochin (all for the same price of $15.00 US). We had been with him for two hours by this time, so we thanked him and asked to go to the ship.
At 13:45 I’m sipping on a cold beer and writing this copy. Tonight is New Years Eve and we don’t have to ask about this evening’s entertainment because the Azamara Quest has it all laid out in the dining room first, followed by the countdown extravaganza around the pool deck and its’ bars, and a fabulous sail-a-way after midnight toward Seychelles with fireworks galore.